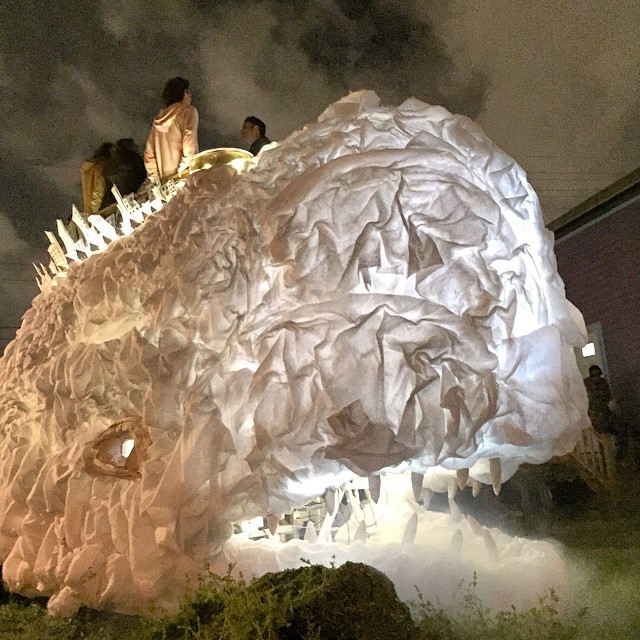 During her twelve months on earth (which is a typical lifespan for the native festivorous megafauna found seasonally in southern Louisiana), Gilliam the Cloud Whale illuminated nearly a dozen events ranging from cruising the back streets of New Orleans trailed by enchanted revelers inevitably and unexpectedly swept up in her wake to form unofficial and mostly unplanned ‘renegade parades’ to being a star attraction at multi-day music and art extravaganzas. Wherever she was, the party thrived all around her, on top of her, and in the very belly of the beast.

Easily the largest push-powered float in the city during her lifetime, and possibly the largest ever, Gilliam’s body was 12 feet tall and 8 feet wide, stretching back 24 feet long from the front of her looming brow before disappearing beneath the cratered asphalt seas of Nola for 15 feet before her majestic 29-foot tail thrust back through the surface, bringing her total length to nearly 70 feet, with the last 20 jutting unsupported above the crowd. On hot sunny days, clusters of people would linger in the nearly 50 square feet of shade created by her massive canvas flipper.

On cold days, people would snuggle close to her body, seeking warmth for their frozen bodies in the the more than 3,000 square feet of polyester batting used to create the delicate tufts of her cloudy hide. And in all temperatures, person after person would approach Gilliam looking for a different kind of warmth, and finding it. Nothing about Gilliam made the Krewe prouder than witnessing the countless joyous, laughing hugs that were showered on her wherever she went.

Impressive as she was in the daytime, Gilliam’s real time to shine came at night, when the 5,400 LEDs hung in independent ‘zones’ throughout her body and tail could fill her to bursting with light that radiated out through her polyester hide as a sublime, ethereal glow, or stutter and flicker as flashes of light chased themselves around through her body, off to her tail, and then back again in uncanny mimicry of the playful yet terrifying dance of lightning as it bounces around the unfathomable interior of an active thunderhead. This effect was achieved through a custom switch, built from old porcelain knobs and hacksaw blades, that controlled the five LED zones (including those in the tail section).

The switch was attached to a cable bundle that was long enough to be brought outside the float and set up on a table when Gilliam was stationary, so that anyone who wanted to could walk up and ‘play’ the lightning, like some glorious hybrid of a pianist and the Sorcerer’s Apprentice. The same sound system that generated gut-punching thunderclaps a tense second or two after each strobing lightning strike also blasted custom live beats by any of several resident DJs, and the multi-zone switch meant that anyone in the krewe or the public could reach out and play the lights in time to the music.

More to come in the future detailing the 2nd story (an even better, portable version of the most coveted MG realty of all: the FQ balcony) 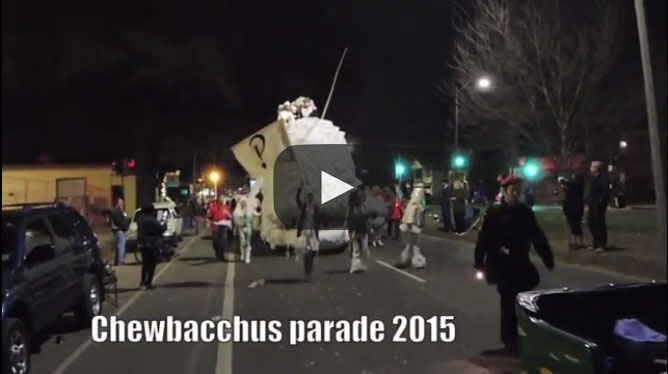 The Times Picayune Arts Writer Doug MacCash wrote a wonderful and flattering article about Interrobang and Gilliam after our debut in Carnival 2015. “Thar she rolls! One of the most magical moments of Mardi Gras 2015 so far was the appearance of “Gilliam” the mysterious white whale float during the Feb. 7 Intergalactic Krewe of Chewbacchus science fiction parade.”

PICTURES OF GILLIAM AND INTERROBANG

In case you hadn’t figured it out, Gilliam was named after Terry Gilliam, the writer and director of inspiring and amazing works ranging from Monty Python to Brazil, 12 Monkeys, The Adventures of Baron Munchausen, Fear and Loathing in Las Vegas, The Imaginarium of Doctor Parnassus, and more. It was, in fact, the appearance of a leviathan / sea monster in Munchausen that sparked the original movement towards a whale creation.

In February 2015, Terry found out about us, and we had a fun exchange on the Facebooks. Below is the screenshot of the conversation!