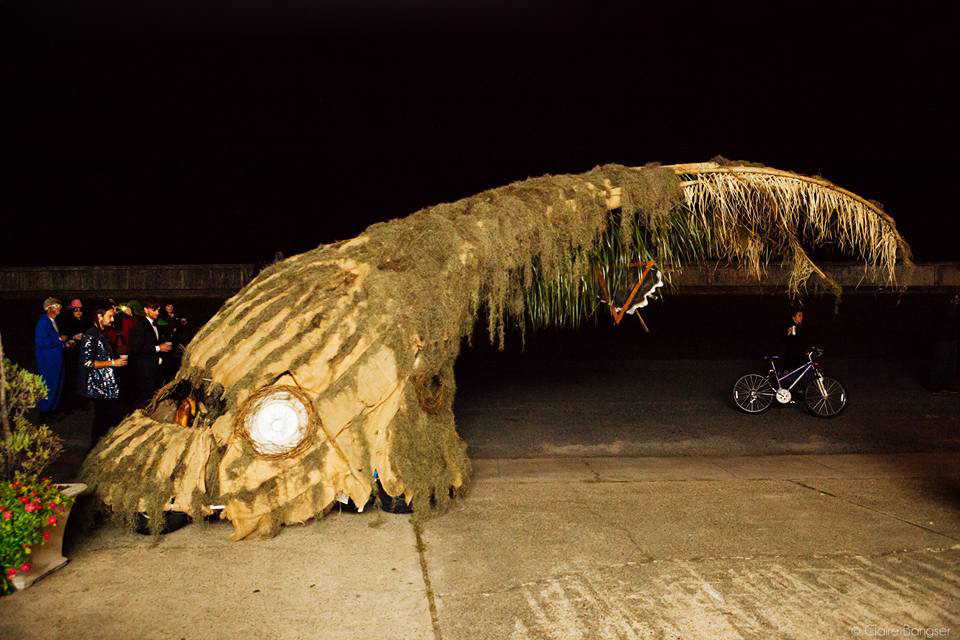 George is a swamp-dwelling art creature conceived and nurtured by the infamous New Orleans parading krewe Interrobang. A 150cc 4-cycle gas engine turns his wheels, but what truly drives George is his insatiable desire to transcend his mechanical origins and complete his metamorphosis into a 100% organic living creature. Born a machine, George’s one dream is to live, and someday die, as a natural monster. The touching simplicity of George’s vision of self-transformation and the generosity of his spirit moved Interrobang to bend all of their considerable energy and ingenuity to the support of George and his timeless dream.

Recently, Interrobang was treated to the sight of George’s eyes lighting up with delight when the cheap mass-produced device he had been using to control RGB LEDs that illuminate his irises was replaced with a new hybrid electro-organic module custom designed and fabricated to be a part of the new him. The unsightly but necessary electronics are hidden in a semi-rigid enclosure inspired by the shark purses that often wash up on the muddy brown-water beaches just south of his Louisiana home, and the new controller looks perfectly at home nestled in the grass and vines that grow in the soil bed of George’s mouth, behind the broken driftwood and cypress knee picket of his lower teeth.

The coming months will be full of excitement for George. He’ll be quite the dashing young monster on New Year’s Eve showing off the saw palmetto gill/ears he’ll be getting for his Christmas gift from the krewe. And then in late February, George takes another big step in his quest to become a real boy when hidden planters are installed all around his lower perimeter and at strategic upper areas, and fast-growing passion flower vines are added to the 165 gallons of living spanish moss already incorporated into George’s striking, shaggy mane. Within a couple of months, flowers will start appearing and George will be the star of Interrobang’s first-ever Blooming Monster yard party. And sometime in early summer, the ripe fruit will be harvested and turned into libations for the first annual Monstrous Passions Renegade Mini-Parade.

PICTURES OF GEORGE AND INTERROBANG